Archaeological Paths company invites you to take part in the incredible 14-day journey to discover the archaeology, history, culture, and natural beauty of Turkey - the region rightfully referred to as the "Cradle of Civilization".

Our tour will start in Istanbul, the capital of Byzantine empire, continue through the legendary city of Troy and the biblical city of Ephesus, later through the timeless and bare rock landscape of Cappadocia. The site of Catalhuyuk, where we can see the beginning of the urban civilization is one of the first settlements where people lived together, building established houses 7 thousand years B.C! Another attraction is Mount Nemrut, considered to be the eighth wonder of the ancient world. The highlight of the tour is perhaps the most important archaeological discovery of the modern times – Gobekli Tepe, The World's First Temple (10,000 BC).

Highlight of our tour will be a special entrance to Göbekli Tepe. 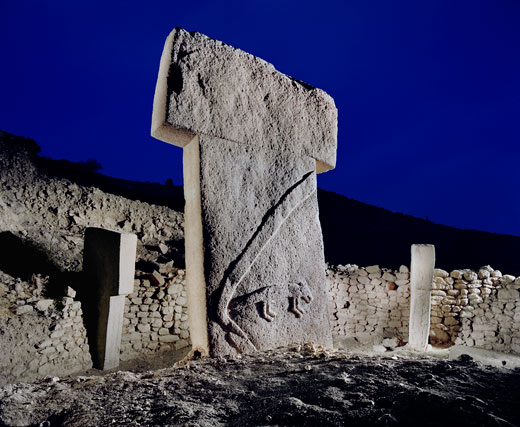 The main point to see will be the well-known site of Gobekli Tepe, the newly discovered world’s oldest temple. It is incredibly sophisticated, dating back to the end of the last ice age, 12 thousand years ago. This is one of the most important and remarkable monuments in the world. It’s perhaps the most amazing archeological discovery of the modern times. The construction date of Gobekli Tepe is estimated to be thousands of years earlier than the dates assigned to the other major structures of antiquity, such as the Stonehenge in England or the Egyptian Pyramids. The World's Oldest temple changes what we knew about the human history. After the discovery of this site, it became apparent that Mesopotamia or Egypt were not the first highly developed civilizations, but thousands of years before that an unknown civilization created those incredible monuments in Turkey. During our journey you will have the chance to see them with your own eyes!

"This place is a supernova" - said Dr. Klaus Schmidt - the main archeologist excavating Göbekli Tepe, "Within a minute of first seeing it I knew I had two choices: go away and tell nobody, or spend the rest of my life working here."

Istanbul - one of the greatest cities in the world, capital of the Byzantine Empire.

After breakfast, we will leave the hotel and visit the Sultanahmet district, called the "historical peninsula". First we will visit various Ottoman ruins and after that the Blue Mosque, the most important mosque in Istanbul with its more than 20,000 handmade ceramic tiles and 200 stained glass windows. Next we will discover and enjoy beautiful examples of Ottoman art in the Topkapi Palace (first Ottoman palace in Istanbul), followed by lunch near the Blue Mosque. After lunch, we will visit iconic Byzantine monuments including the St. Sophia Museum (Hagia Sophia, the former Byzantine Church) – the greatest surviving example of Byzantine architecture. Next, we will explore the underground Basilica Cistern, which was the main water provider for Constantinople, and visit the Byzantine Hippodrome where we will see beautiful obelisks and columns from the Egyptian, Greek, and Roman periods. In the evening, we will return to the hotel for dinner. Overnight at the hotel in Istanbul.

After breakfast we will check out of the hotel and drive to Troy via the European part of Turkey known as "Thrace". Upon arrival to Eceabat we will have lunch by the water and then take the ferry across the Dardanelles to the Asian side of Turkey – Canakkale. After that we will visit the ancient Troy, which was a city both factual and legendary. It is best known for being described in the Greek Epic Cycle and especially in the Iliad (one of the two epic poems attributed to Homer). Besides visiting the well-preserved ruins of the ancient city, we will see a replica of the Trojan Horse. Overnight at the hotel in Assos Dove.

Ephesus – once the most important commercial center of the ancient world, a religious center of early Christianity, and today a unique and amazingly well preserved ancient city that attracts visitors from around the world.

After breakfast we will check out of the hotel. We will drive to Pergamon, which is located in the modern city of Bergama. Here we'll take a cable car up the mountain to visit the ancient Akropolis. Then we will drive to Ephesus where we will see the best-preserved and restored Hellenistic-Early Roman age city; here St. Paul lived and preached for a time. Overnight at the hotel in Kusadasi.

In the morning we will travel to the beautiful area of Dalyan from which we will take a two-hour boat ride to view the ruins of Kaunos. Kaunos used to be an important ancient port at the delta of Dalyan river. The rock-cut tombs along the riverbanks, traditionally dated back to the 9th century B.C. and earlier, are enveloped in mystery. They are said to be the tombs of ancient kings of Kaunos, with facades resembling ancient Greek architecture. In the past the tombs probably contained treasures hidden behind false walls, but over the years they were looted numerous times.

On day 6 we will visit the city of Demre, near the ancient Roman city of Myra. This was an important locality in ancient times. St. Paul stopped here during his travels, and St. Nicholas (who inspired the legend of Santa Claus) was a bishop of Myra in the fourth century. Incredible ancient ruins are preserved here. We will also visit, by boat, the small island of Kekova to view the underwater ruins (sometimes referred to as the Kekova Castle) which can be seen from the boat. We will have the opportunity to swim and snorkel in the clear turquoise waters.

After breakfast we will check out of the hotel and drive to Konya. On the way to Konya we will visit the Mevlana Museum (home of the Whirling Dervishes). It is one of the most important religious and mystical sites of Turkey. After lunch in Konya we’ll visit Catalhoyuk ruins – one of the world's earliest known cities dating back nearly 10,000 years! At this most significant archaeological site of the last century we can see the beginning of the urban civilization. Catalhoyuk is the largest and best-preserved Neolithic settlement currently known and is considered one of the key sites for understanding human prehistory. It is an active archaeological site rarely visited by typical tourists. Overnight in the Cappadocia region.

Cappadocia - the timeless and fantastic bare rock landscape of valleys and mountains, rock-cut churches, and mysterious ancient underground cities. This region is a geological wonder in its own right, forming a "lost world".

We will have time to see different parts of the region and photograph the unique otherworldly rock formations, volcanic peaks and mountains. The rocks that form the characteristic Cappadocia landscape have eroded for millions of years in the lakes, rivers and winds. Apart from gorgeous geological wonders, Cappadocia also boasts of fascinating rock-carved chapels and churches dating back to the 9th and 11th century.

We will spend another full day in Cappadocia. After breakfast we will drive to Derinkuyu, large and mysterious underground city with numerous storeys. We will also visit the Zelve Museum. Lunch will be served in Avanos, and after that we will go to Urgup, which is known for its famous dwellings built right within cliffs and caves, its wines and its hand-made carpets. Dinner and overnight in Cappadocia.

After breakfast we will check out of the hotel and drive to Nemrut (Kahta). On our way there we will visit Karatayhan Caravanserai. We will have lunch and a break in Kahramanmaras, which is famous for its typical Turkish ice cream made from goat’s milk. When we’ll arrive in Kahta, we will check in at the hotel. After that we will leave to admire the sunset from the peak of Mount Nemrut.

This is a world-famous ancient megalithic site and one of the most interesting tourist attractions in Turkey. It is often considered the 8th Wonder of the Ancient World. At the summit of this approximately 2000-meter high mountain lie the ruins of the ancient Commagene Kingdom, which was at its height of power during the 1st century B.C. The most remarkable feature of the Mount Nemrut site is the giant stone heads of ancient gods. It is said to be the king's tomb, although no grave has ever been found there. Who really built it and why? How far back might it date? It is still a mystery even today. After enjoying the sunset we will drive back to the hotel. Dinner and overnight in Kahta (Nemrut).

After breakfast we will check out of the hotel and drive to Urfa. On our way we will see the biggest dam in Turkey, built on the Euphrates River. We will pass Urfa and drive to Harran, which is a place full of surprises, with its Arabic culture, colorful people, old historic buildings, and ancient Islamic university. Then we will drive to spend the afternoon in Göbekli Tepe. It is an incredibly old, yet extremely sophisticated site, predating the conventional date for Stonehenge by 6,000 years. In the evening we will check into the hotel. Dinner and overnight in Urfa.

After breakfast we will take a walk through the beautiful flower-filled gardens along the Pools of Abraham with their maze of canals full of thousands of carp fish, which are held sacred and fed by the local people. We will also walk to the Cave of Abraham where, according to a local legend, the prophet Abraham was born. In the afternoon we will visit the Urfa Archeology Museum to view a number of ancient artifacts, including incredible stone sculptures, one resembling a totem pole, excavated at Göbekli Tepe.

After breakfast we check out of the hotel and we will transfer to the airport in Urfa and fly to Istanbul. After the check-in at our hotel in Istanbul we will have some free time for rest, shopping or exploring on our own  before dinner. In the evening we will take a private boat cruise on the Bosphorus strait. During the sunset we will have our farewell dinner. Overnight in Istanbul.

After breakfast we bid each other a warm farewell, check out of the hotel, head to the airport, and fly back home. 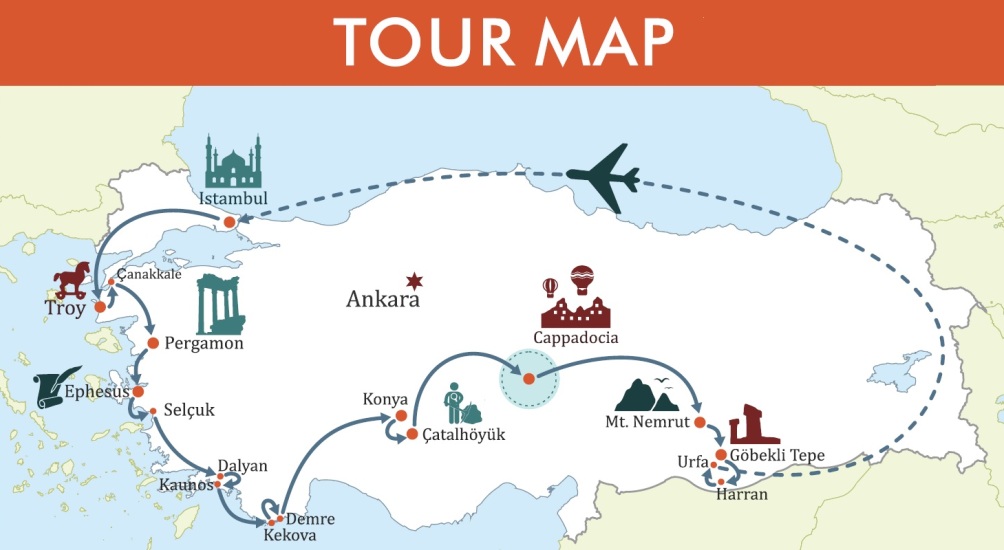 Price per person: $7985 in a double room (deposit is only $800 during booking!). If you are traveling alone, you can share a room with another tour member. If you would like to have a single room, the single supplement costs an extra $1985.

International flights to/from Istanbul in Turkey; Visa cost (visas cost $20 and have to be applied for and issued online before you travel); Drinks during lunches and dinners.

Next, please make the deposit payment to confirm your place on the tour. Since the number of places is limited, we encourage you to book the tour as soon as possible. Please contact us if you have any questions.